A Spade is a spade, a good dog is a good dog and a bad dog is dreadful and you would know about it! Margaret Swann was totally devoted to the Dachshund world and from the wealth of knowledge that she had taken on board throughout the years it does go without saying that Margaret always had an honest answer to back her ever popular opinions up.

Of course the Swansford story starts way back in the early post-war days when Margaret Kay was taken under the wings of Harold and Peggy Roberts of Bolivar Alsatians (as they were in those days) and Dachshunds.  Harold, who was secretary of Blackpool Championship show from 1932 to 1974, could see Margaret was keen on the showing scene but most importantly had an eye for a good dog.  the Alsatians were to be Margaret;s first love and Harold was a great Alsatian enthusiast and one of the earlier Championship judges of the breed.  Going with Harold to an early post-war Leicester Championship show she fell in love with a Alsatian bitch that was being shown; after a short space of time Harold purchased Anna of Hotwood for Margaret to show.  Margaret showed her successfully to win five Reserve C.C.'s. before she was pulled and mated to Ch. Indigo of Brittas belonging to Mrs Barrington, one of the most famous Alsatian breeders ever.  Two bitches were kept back.  Anna and Arlene;

Margaret was smitten with Ansa and offered to give up smoking if Harold and Peggy would let her show her.  Margaret made her up and even won the old style Working Group with her and never touched a cigarette again!  Her sister went to a well known obedience trainer and G.S.D enthusiast Nicky Swann; Arlene also became a Champion and group winner and Margaret Kay became Mrs Margaret Swann!

The Swansford partnership was born and many Alsatian champions followed, Margaret having been taught the art of presentation and of course had that natural flair in handling with the greatest determination to win.  no matter what breed the overall picture of dog and handler needed to be on show at all times, after all it is a beauty competition, and that included the handler - no scruffy jeans or t-shirts, glamour and style was the key as it was throughout the whole of Margaret's life.  Those of you who will have know Margaret back to her Shepherd days will without doubt remember her gaiting dogs in hats, long flowing dressed and high-heeled shoes.

The interest and success of Alsatians continued.  In 1969 Margaret judged Alsatian males at Crufts, her most memorable judging appointment.  her CC and eventual Best of Breed winner was Ch. Nibelung of Charavigne who then went on to win the group and Best in Show.  Ironically two years later Nicky Swann judged Alsatians at Crufts and his Best of Breed winner, Ch Ramacon Swashbuckler, also went on to Best in Show.  How many partners have both sent a dog through to such a high profile win?  It goes without saying that Margaret had no time for the modern-day Alsatian but would agree that some earlier Alsatians did go to the opposite extreme.

Dachshunds were always in the picture and in the house of Bolivar Peggy Roberts had owned Smooths before the war.  Once the war was over and normality resumed, the Roberts bought their first Long-haired brood from the famous Primrosepatch kennel.  a string of Bolivar champions followed with Ch Jane of Bolivar being a great star.  Of course everyone needs to earn a living and in the early 60's Margaret decided to cease showing and breeding and opened her dog beauty parlour in Manchester.  Margaret still attended and was involved in the running of the blackpool show, a show in those days with a holiday atmosphere and full of parties and relaxtion, but was out of the showing scene.  In fact in 1973 Nicky was made President of Blackpool and I'm sure that the pink champagne would have flowed!

Things were about to change, late in 1969 Margaret received a phone call from Avril Spiers, breeder of the famous Murrumbidgee Longs, an Australian at the time living in London.  Avril was upset that she had a young CC winning bitch who didn't get on with her kennel mates and no one wanted her.  asking Margaret if she was interested, she replied that she did not want another 'bloody' Dachshund.  Besides, Nicky said that all Dachshunds were "dirty, daft and disobedient"!  Margaret was still very busy with ther trimming business and didn't want a dog to campaign seriously but Avril was persistent and a few days later arrived in Margaret's shop with an overweight, curly-coated Long-haired Dachshund.  Margaret immediately announced that she would make the bitch a champion!  There and then Endora of Murrumbidgee was hers and the birth of the modern-day Swansford Kennel was announced.  With just two weeks to go until her first show (Crufts) so much time was spent on grooming and exercise to ger her in condition.

Under breed specialist Dr Ben Raven Endora won her second CC and Best of Breed.  She went on to win Twelve.  Hooked once again, Margaret purchased another bitch from Avril, Swansford Murrumbidgee Isadora, and she too quickly gained her title. 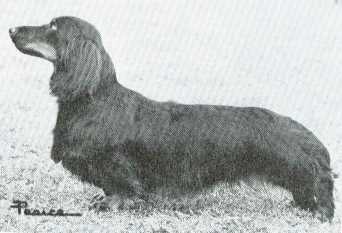 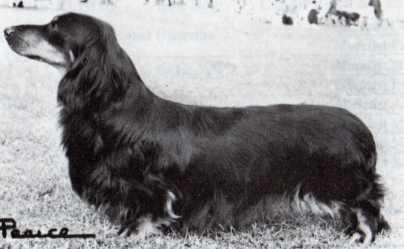 In the early 1970's a black and tan male was bought from Olive and Eric Cunningham who owned the famous Truanbru Longs and he became Top Dog all Breeds in 1972.  Ch Swansford Brigg of Truanbru also won the Group and Reserve Best in Show at S.K.C that year (just as Ch. Lanador was to do in 2001)  With this foundation the Swansford kennel has never looked back and a constant stream have followed ever since:  Ch. Toreador, a firm favourite (Ch. Brigg x Ch. Endora), Ch Liesl who was by Molly Raine and Jeff Crawford's Ch Imber Hot Coffee (to who Margaret awarded the CC at Crufts at the age of nine) out of Ch Isadora, this successful mating produced a constant sream of big winners.  with this background the Swansford Longs now proved to be a very good starting point for many other top-winning kennels.  they produced many winners for the likes of Bronia, Brianolf, Frankanwen, Lyrenstan, Feoirlinn and Abitibi. 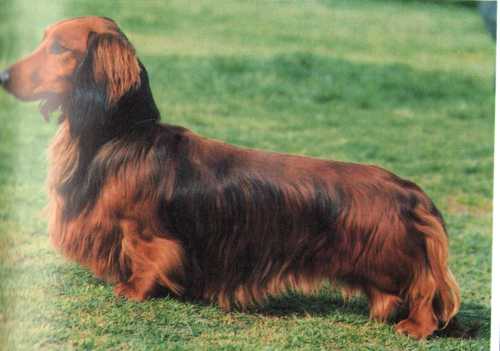 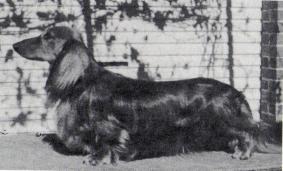 Margaret was also very proud of having bred Avril's (by now Avril Varley) Aus. Ch Swansford Mancini of Murrumbidgee and sharing in the reflected glory of the influence he had on the variety there.

Always a keen lover of Miniature Longs and a huge fan of Hazel Fielding's Delphiks, Alice and Fred Thomas' Trumonds and Alan Sharman's Southcliffs, but proving a nightmare to keep under the weight, Ch Rosie Lee soon gained her title.  Willy the Wire (Ch Daxglade Dancing Major of Swansford) was quickly made up in 1974 and proved his worth as a sire as he can be traced behind many of today's winning wires. 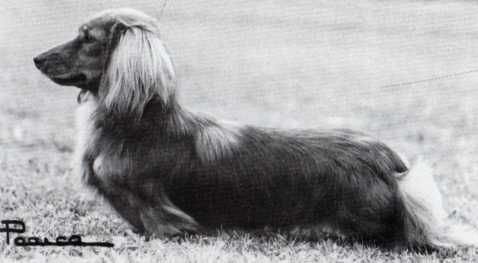 Margaret and Nicky's marriage was to end, but Margaret ploughed on with the dogs, constantly producing champions not just for herself but also for others.  I think it is fair to say that of all the other Long kennels the one for which Margaret had the greatest respect had to be Jean Jensen's Albaneys, Ch Rebecca Celeste being her ideal.  It was to be Ch Albaney's Red Ranger (bred by Jean and owned by the Gatherals) mated to Ch Zsazsadora that a star was born, truly a dog in a lifetime.  Ch Swansford Arrandor (Brett) won 49 CC's, many groups, All Breed Best and Reserve Best in Shows, Top Hound and Runner-up Top Dog all Breeds and one time CC record holder.  The greatest heartbreak of all was to find that Brett was streile.  Fran Mitchell's Ch Bronia Conquistador went on to break the record, Margaret being thrilled that he comes from a direct line of seven Swansford males.

Poor health was now in the picture though the grit and determination was still there.  In 1990 Margaret was to have her spine operated on with great success, the relief from back pain was there for all to see.  just getting back into the swing of things, a nightmare was to come and Margaret was run over by a speeding motorist outside her cottage.  Of the four dogs that she had with her three were tragically killed and Margaret had serious injuries that were to affect her for the rest of her life.

By this time I had been visiting Margaret on a regular basis; taken with the dogs, I was allowed to spend my weekends and school holidays at the kennels.  i was even allowed to scrub kennels and walk dogs for miles! of course by this time I had got the bug and had been fortunate enough to make my own Swansford Kamador a champion, who has proved a great sire for us.

Our friendship and trust had grown over the years and, with this in mind, Margaret very kindly offered me full partnership in the Swansford dogs and affix.  We have been fortunate to carry in producting a constant stream of champions including another Miniature Long Ch. Vineacre Venetia of Swansford.  At the Great Joing 2004 I was lucky enough to make Vivadora a champion, she would have been the 50th Dachshund Champion that Maragret was involved with taking the CC tally to well over 400.

A great lady, the type that would have made a leading all-round judge, she was an elegant down-to-earth dog lady with a wealth of knowledge she was only too willing to share.  I know I will miss Margaret and will not be able to thank her enough for all that she has taught me, or all the great times and trying times, but most of all for letting me be part of her life and entrusting me to carry on a truly historical name SWANSFORD.